I just spent the last 2 weeks running around on fumes. I had 2 major projects due for art classes, a major paper, and a test. Paul went out of town for a week to Germany, and I probably fed the kids toxic amounts of fast/pre-prepared foods. I didn’t know how trashed I was until this weekend; I came home from school on Friday and fell asleep on the couch until 9:30 at night, went to bed at 9:30 and slept until 11:00 the next morning. I fell asleep again around 3:00 p.m. on Saturday and slept until Sunday morning at 8:00 am. I them proceeded to fall asleep at 4:30 p.m. and sleep until 8:00 this morning.
I have never in my life slept like that……I think Paul was pretty sure I was dieing or something, but like the super husband he is he insisted that if my body wanted the sleep, I was in need of it, and he held down the fort like a champ. He cooked and cleaned and got the kids out the door for school this morning. Thanks Babe!
So today I had a lady bits Dr’s appointment, which went as to be expected (other then the Dr. being an HOUR late for the appointment, I think I would have left if I hadn’t had to psyche myself up for the whole thing in the first place.) After which Paul and I went to lunch, and made plans for spring break next week.
For Spring-break we are going to be working on the curb appeal in the yard, we are trying to not spend too much money, (since we are moving in a year) but we also need to get the outside more in line with the inside. So I have decided I need a list, which will hopefully end up with most of the items checked off by the end of the week! (not this week, next week)
(here is a horrible image I cobbled together in paint showing some of the changes using an image from google earth, I got rid of anything that identified the address etc. for privacy reasons.)

I am sure I will add to this list as the week goes on, but I think between Paul and I this is doable so far (Paul is taking the week off to be with me for spring break.)

I didn’t do a new post on the Pathway, so I am adding a picture here, the grass is none too green though since it was still early spring! 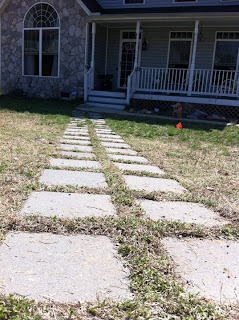 I’ve only just recently finished the rest of the garden (months after this original post!) so pictures will be posted later on!