So remember how I was knitting Weasley sweaters for my kids? If you remember I managed to finish Isaac’s for his birthday in October, after that I started Emmie’s and got her’s done mid November, and then made one for my husband Paul, which I managed to finish a week before classes let out in the middle of December. Ack! 3 sweaters since the middle of July! My left index finger is still a little numb. (I only knit during classes or in the car if I’m not driving, that way my hands have something to do while I’m listening, or sitting idle.)

I used this book mostly for the patterns, but I made quite a few alterations. I added a thick rib on the sides of the kid’s sweaters, as well as ribbing at the hem. I felt like the pattern made really boxy sweaters so the addition of the hem ribbing really balanced them out better. I added the side ribbing because I didn’t like the amount of ease that was in the pattern even though I did the exact stitch gauge and sizes suggested, but I have read my exact same complaint several places, so I think sizing was an issue with this book.. With the sleeves I knitted in the round using double pointed needles and I made them longer then they  needed to be so I can simply fold the cuff back and they will wear them longer. Both the kids sweaters are done in 100% wool, and I used the duplicate stitch method to put the initials in the front.

Paul’s sweater is made from a nylon wool blend (not my choice, that is the yarn he chose! Stink’n Paul, I’m not a fan of synthetic fibers, but he really liked the color.) I added 2 inches in length to the body of the sweater, and 4 inches in length to the sleeves (this pattern has REALLY short sleeves and I‘m not the only one to have had trouble with it!.) I did not love how the front neck turned out in this pattern, it is very straight and I felt like it should have had a curve added so it wasn’t right in your neck; oh well, I’m not going back now and adding one!  I used a brown wool fabric for the letter (using fusible to attach it to the front,) and then a zig zag stitch to secure it down. The buttons are just some brown ones from Joann’s. I think Paul wanted a slightly more subtle look for the letter then the gray and red of the original movie one, which is perfect for him since he is A. not a crazy dresser, and B. he will actually get regular use out of it without it being costume-y.. 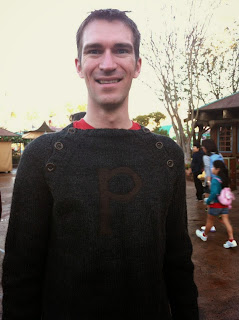 Anyway, I am now totally jealous of everybody’s sweaters! It was so fun to see them all wearing them at Hogwarts this Christmas! I am thinking I need one now, although I can’t decided if I want one like the kid’s or Paul. (His took forever it seemed, but I think that is because HE is so big rather then the sweater being more time consuming!)