So we are in week 3 of Project Run and Play and this weeks theme is “Sewing through the Decades” I have managed to NOT win any of the two previous weeks viewer participation competition, (not that I thought I would, I actually totally called the winner of week one before it happened!) but I wish I knew where I was in the running. I wonder if the judges would think of releasing a top 5 or something just to get an idea of whether I’m close to the mark, or totally bombing? I have much older children then most of the people playing, maybe the cuteness factor just isn’t there? (note to self, acquire cuter, younger, children…) UMMMMM………. totally kidding (unless it really would help…) no kidding, definitely kidding.

It’s not actually about winning really, I am LOVING the motivation to get stuff done on a deadline, but I start school tomorrow, and it’s going to KILL me to keep doing this and school (18 credit FINAL semester, can I get a WHOOT WHOOT!) and if there is no way I am even competitive, I want to be put out to pasture now rather then later when I am just a dead horse.
I HAVE however completed this week’s challenge (and next week’s as well actually,) *and* next week I will also have an awesome giveaway (my first) related to next week’s project, to a lucky follower who leaves me a comment on that post, so there you go, something to look forward to!
ANYWAY time for the grand reveal of this weeks ensemble……. 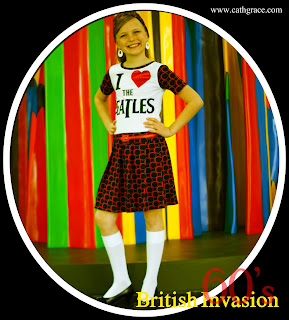 Yup, I totally went *groovy baby* and went with the 60’s. My “British Invasion” 60’s outfit was inspired by my father; when I was a little girl I remember him having a cassette tape called “The British Sixties” and we would always play it on car trips. (My father is English and was a teen in the 60’s) When going through his photo albums as a child, I remember being struck by all the fabulous mod 60’s fashion!
And in case you were wondering I do <3 The Beatles!
As far as the pattern was concerned, I made it very much like my Anthropologie “In an Instant” dress knockoff, with just a couple of changes to the scale of various bits like the sleeves and where the waist line fell etc.
Anyway, please leave me any comments you would like to (I love comments!) and I also love followers!