Well, I finally was able to take Emmie out to have her picture taken today, it has been raining here, and I needed a break in the weather to take her “on location” for her shoot.

Are you ready for my offering for Project Run and Play‘s week 5? No? Please look at it?!?! 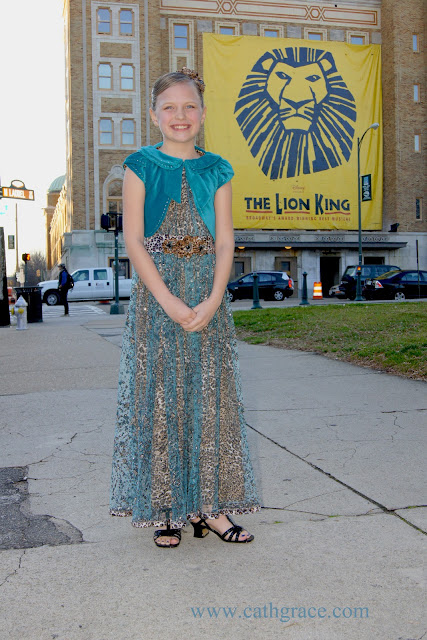 I’m calling it “The Lion King Dress” for lack of a better name……… maybe cheetah princess? Um no. Anyway, we have tickets to go to the Broadway version of “The Lion King” next week, and I decided Emmie’s special occasion outfit should be a new formal dress to wear for the show. (We always get dressed up to go to the theater, I think it makes the occasion more special and you *feel* differently about the event. When we took the kids to “Wicked” we were the only ones dressed up in the theater and we actually had several ushers and cast members thank us for making the effort.)

I used burda pattern 9545  for the starting shape of the dress bodice, but pretty much changed everything, I am going to be adding a tutorial for this dress to the blog this week, (edit, here is the tutorial) I just need to get it written between classes and my fieldwork. 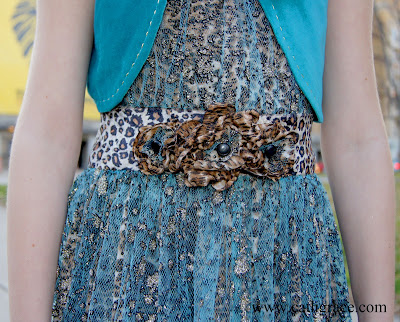 The flowers at the waist of this dress are pins that can be moved around, I prefer them on the shoulder, but you can’t see them under the jacket that way! 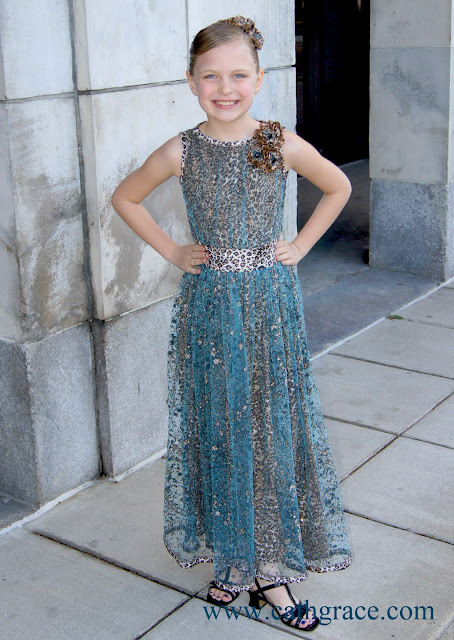 The dress is made from 3 different fabrics, a tulle net with tons of glitter splats that look like animal print to me, a velvet animal print, and a plain-weave animal print. I made the dress in a ballgown length because it seemed fancier, and because I didn’t want it to feel cheaper with the animal print, sort of like a cocktail dress for an adult or something. 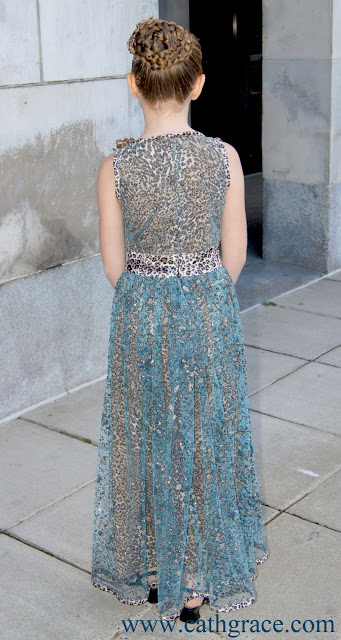 The back just has a simple zip closure. 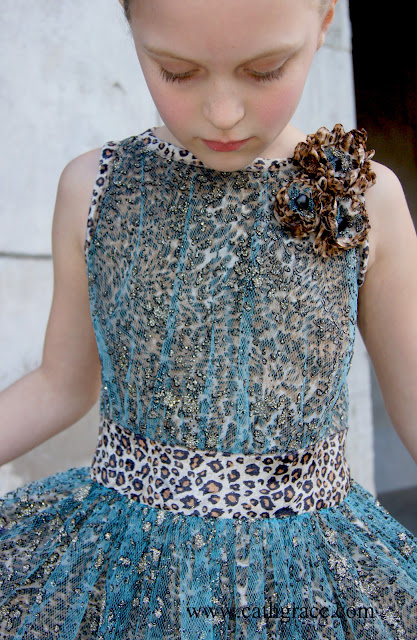 I love the color shift that happens from the gathering density changes in the tulle layer. The blue is “Emmie Blue” in our house, it is miss Em’s favorite color, and she tries to wear it as much as possible.
I bound all the edges in the velvet so that the tulle never touches Emmie’s skin since it’s a little scratchy. 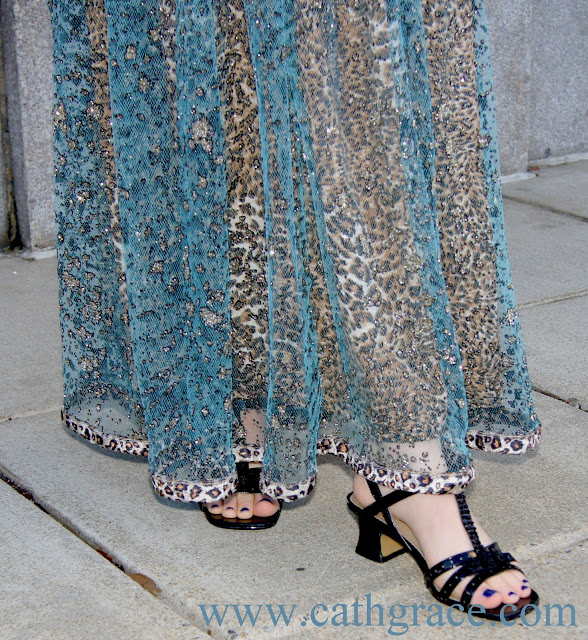 The tulle layer is hemmed in the velvet animal print. (the shoes were very exciting for her, she asked for black “high heeled” shoes, and I was able to find this in wide for her on Amazon. She feels *very* grownup in them. 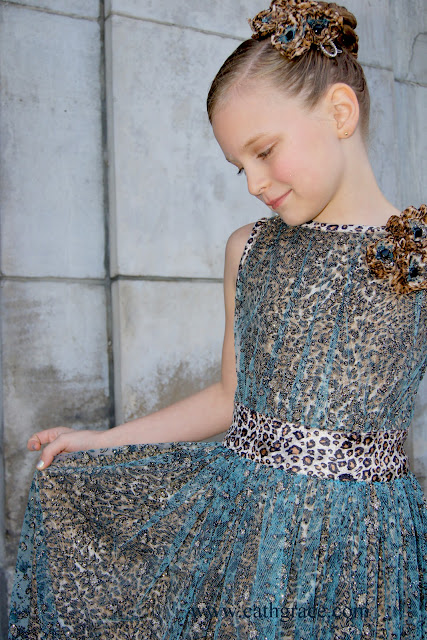 The animal print velvet is also at the waist. 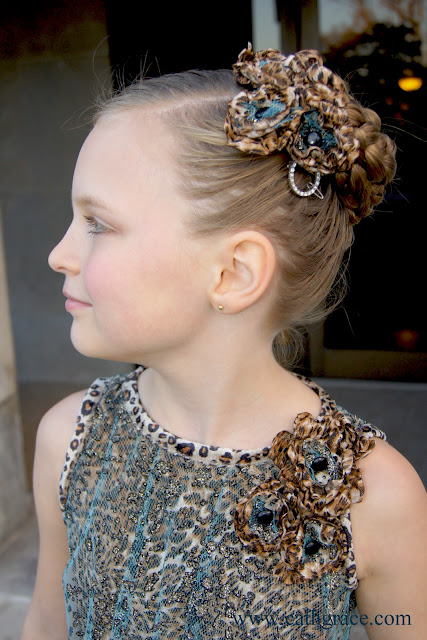 I made 6 custom flowers for this dress, sewn from layers of the interlining fabric, the tulle, and buttons. They are all sewn onto a pin base so they can be moved around. (The ones in her hair just have hairpins pushed through the pin portion.) 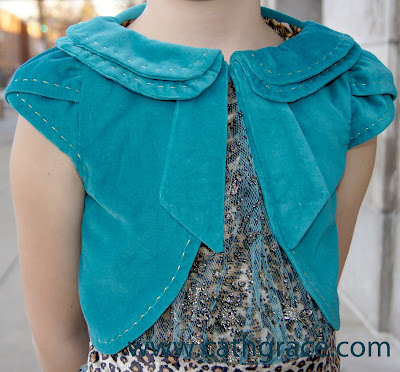 The bolero jacket is made from cotton velveteen and has a double collar with sailor style tie ends, and tulip cap sleeves. The edges are bordered by Japan gold passing embroidery thread in a large running stitch. It closes at the neck with a single hook and eye, and is lined in the base dress animal print. (My daughter has already pointed out to me that she can wear it with other clothes too. 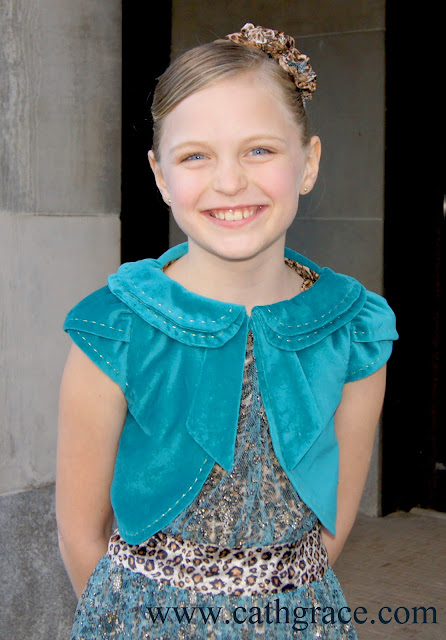 Emmie loves this dress, and feels very fancy in it. I wish the amount of sparkle from all the glitter translated onto film, it really glows as the light hits it. (I would almost suspect that all the glitter fell off into my house, but there definitely is still glitter on this dress.) 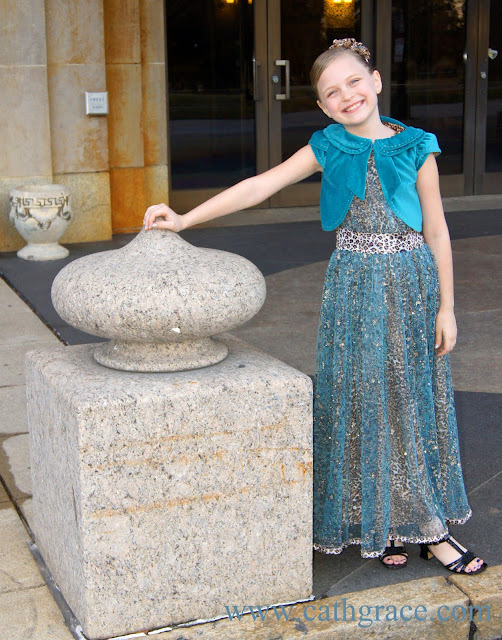 So what do you think? Appropriate for “The Lion King?” I am not sure about this one and Project Run and Play since this is definitely a big girl dress, rather than a little girl dress, but I couldn’t do any worse then I have been! And I would rather make what I want to make, than what I think could do really well but make Emmie less happy.