I got Isaac a trunk at an estate sale for $10.50, which was killer considering it was an original WWII era footlocker with it’s original insert and everything. I decided that it would be amazing storage for the bottom of his bed in Korea, but there are going to be several phases to the trunk’s renovation, and today is going to be part 1 of several parts before the footlocker is ready to go into his room.
Here is a picture of another WWII era footlocker that is VERY similar to mine (source here) It really is so similar, even down to the paper style that is lining our’s! The outside of our trunk has been completely painted black, and the lock has had some stuff done to it, which is fine, I’ll just have to figure out a way to beautify it.
Although the inside is original, and the pattern on the paper is cool, it is also gross and peeling. I knew that I wanted to clean the whole inside surface up, so that it felt hygienic and looked new again. 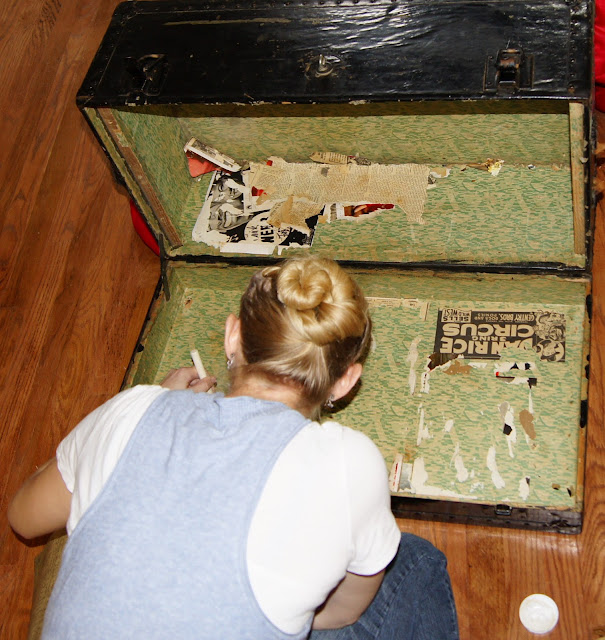 I peeled as much of the loose paper up (including the glued in circus posters that someone put in the lid, which apparently was a common practice if you remember all the stuff pinned to the inside of the original WWII era footlocker picture!) and then I vacuumed the inside of the footlocker out. 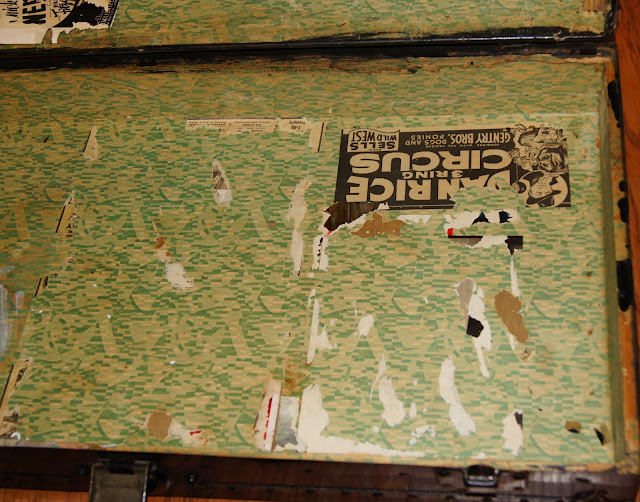 The paper I chose for the decoupaging was a 12″ x 12″ scrapbook paper from Hobby Lobby, that I got on sale for .25 a sheet, (I used 45 sheets for the whole project.) The original was done with huge pieces of paper, but I think it’s easier to smooth out smaller pieces of paper, as well as liking the look of the torn edges. 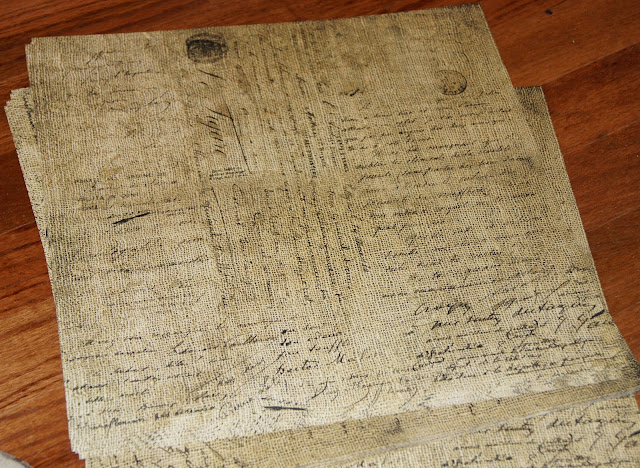 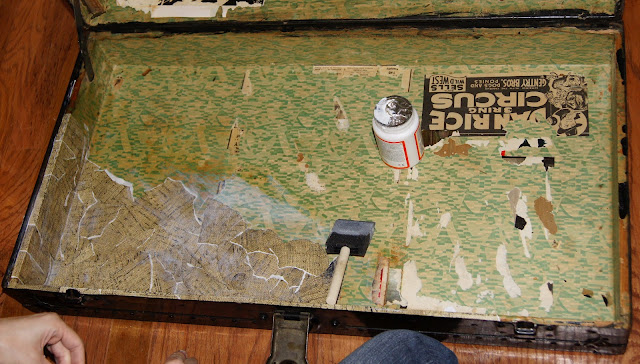 I used gloss Modge Podge as the glue and top coat for this project, usually I have used just plain old white glue for this sort of thing, but I was very impressed with the Modge Podge and how I didn’t get any ripples in the finished surface, and I would definitely go with the good stuff for any similar projects in the future. A good tip that I thought worked out well, was to pre-fold the paper if it needed to go into an inside, or outside corner, that way it went in crisply and stayed in place well. 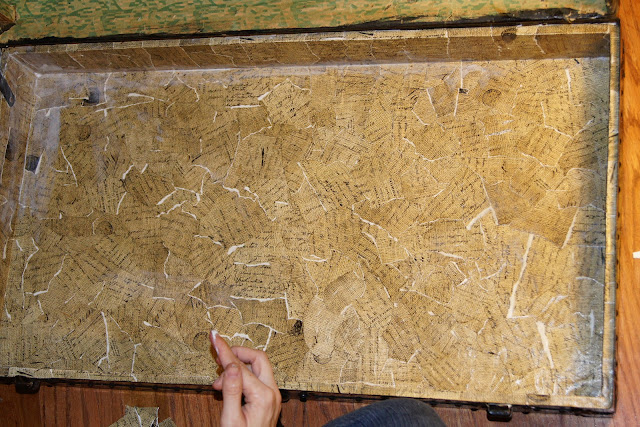 Be prepared to get sticky, and rub things with your fingers (even though most of the installation is done with a sponge brush. After the glue dries it goes clear and glossy, which is awesome and made the trunk feel so clean and ready for his toys to go inside! As a bit of a nod to the circus poster placement, I also used the Modge Podge to add some pictures to the lid. Isaac picked a couple of favorite WWII propaganda posters, and I added an image of my grandfather’s Hawker Hurricane fighter plane taking off, which Isaac also LOVES. (I glued a few star stickers and some Americana style buttons to the inside as well.) 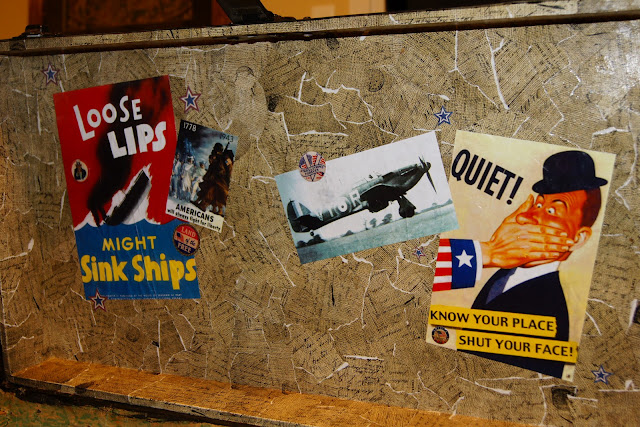 The inside is now perfectly clean, nostalgic, and is going to make him smile every time he see’s the pictures on the lid! I also decoupaged the tray insert, but will only show that in the final reveal, as it was the exact same process as the inside. I didn’t worry about getting the glue on the trunk at all since I am going to be varnishing the outside too, and it is just more of a barrier between Isaac’s stuff and the sort of creepy dirty feel it used to have.

Next is dealing with the outside, and adding some feet to make it tall enough to sit on as a bench at the bottom of his bed so it can do double duty. I am pretty excited about this project as I was originally thinking about putting a Restoration Hardware bench at the bottom of his bed, and it was going to be a LOT more money without all the storage and original awesomeness of a genuine WWII footlocker!

(P.S. Thank you Paul for taking pictures for me while I was working on this, I am honestly the worst about taking pictures, so the fact that you thought to do so without me even asking you to was awesome!)