So I have been trying to put together my giveaway for my 200th post, but while I have been at it, Halloween time is slipping away, and it will be too late to share my projects for that! So instead I am going to catch up with what I need to, and then I will do the giveaway (I am trying to put something really fun together.)

This year for Halloween Emmie wanted to be Marie Antoinette (I actually bought all the stuff for this costume last summer while we were in Alabama for Paul’s Air Force training, but I ran out of time to make it since I was doing school work in the fall, and she was a Lion in a tutu by recycling her school play costume.) Anyway, this year I promised her I would actually make her the costume I intended for last year, and I think it turned out pretty fantastically!

I’m going to share the whole look later, but for now, I thought I would share the wig I made over for her costume. I started of with this wig for $8 from amazon, 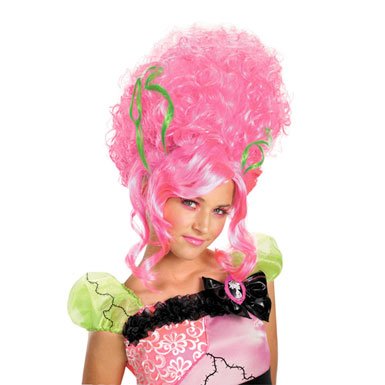 It’s supposed to look like a rock and roll bride of Frankenstein, but when it arrived, it actually looked like a flattened and squashed cotton candy wig. The first thing I did was cut off the 4 little sections of green hair right by the cap that the hair was sewn down to, and then put it on my poor scarred foam head (the movers were NOT kind to her poor face.) Here are the before pictures, I had brushed the wig out by this point. 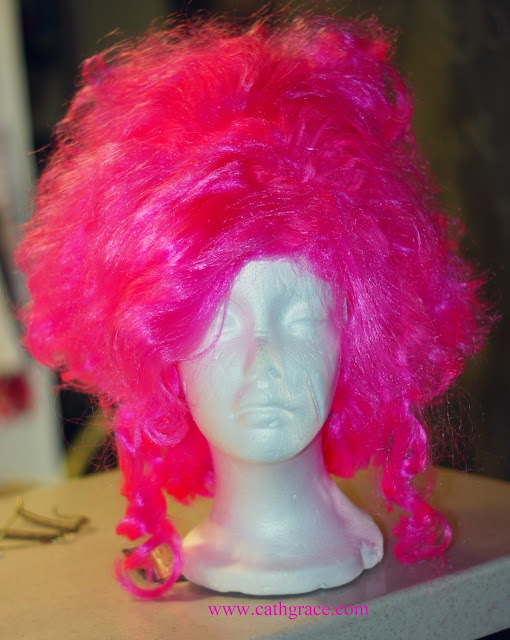 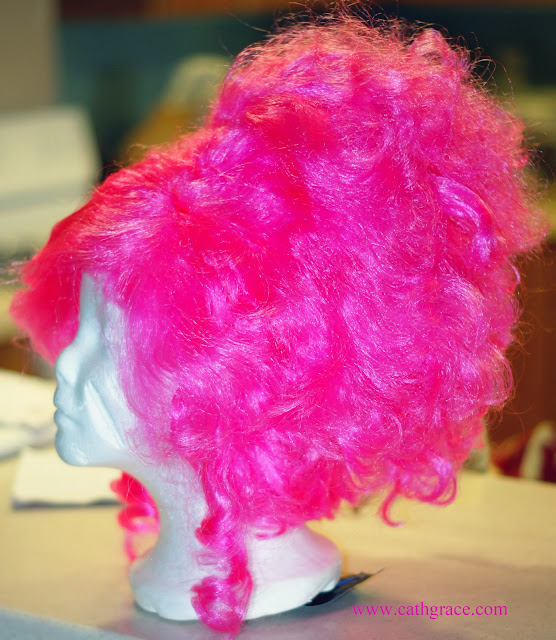 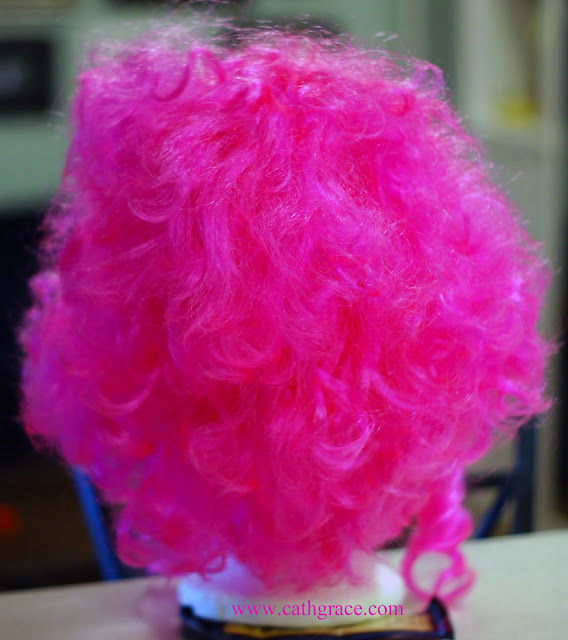 There is a fantastic cone built into the cap of this wig, so you get a nice tall top. The first thing I did was begin to roll the front into big curls, 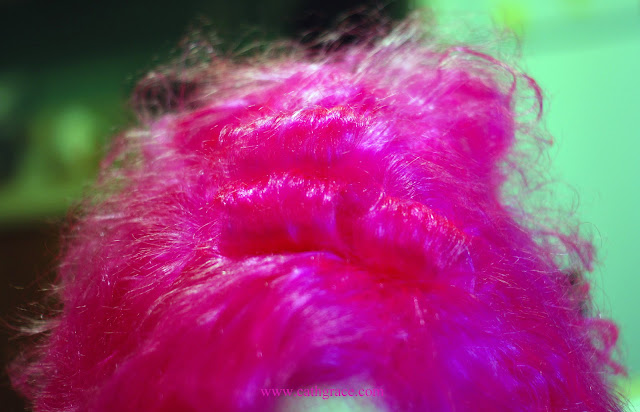 I did this with just my fingers, taking one section at a time, 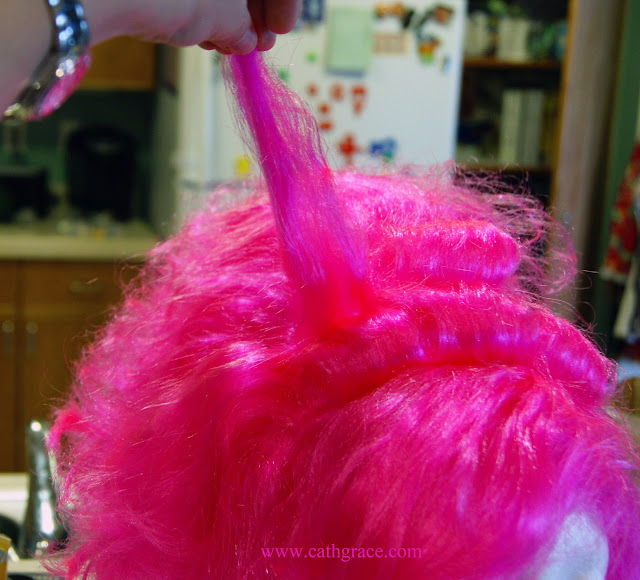 and rolling is around. 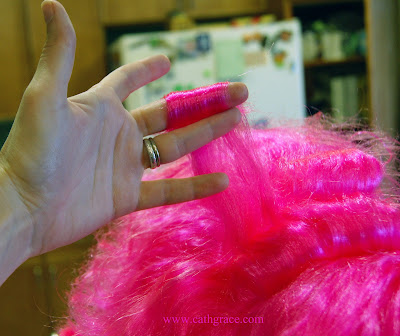 After rolling the whole thing, I would pull my finger out, 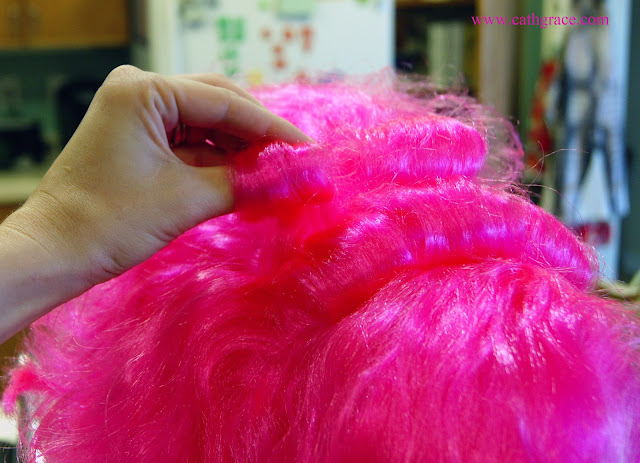 and then add a line of hot glue. 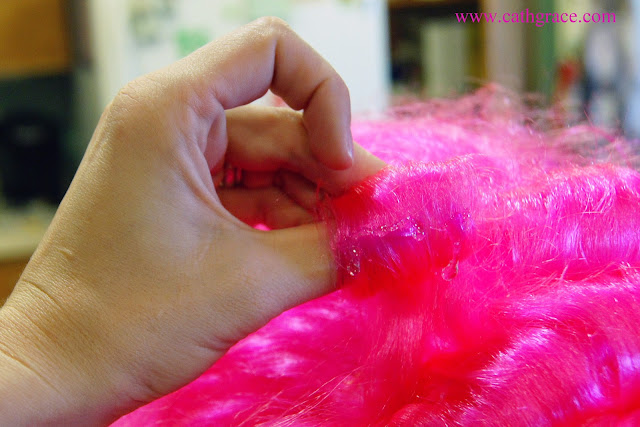 that I then squished down to the cap. After rolling the whole front, including dealing with the front bangs, I sprayed the whole front section with a ton of hairspray.

For the sides and back, I fired up my smallest curling iron, I tested it first to make sure I wasn’t going to melt the hair, or ruin my iron on a small section, but after I knew it was going to be fine it went quickly. 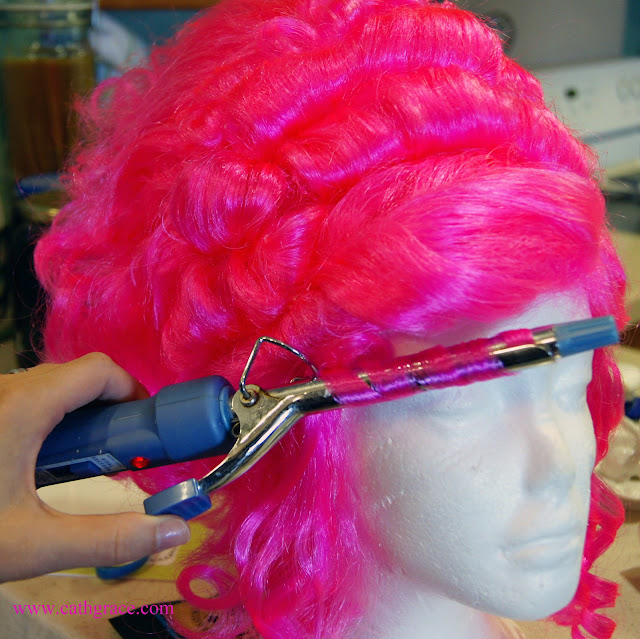 I then hair sprayed and glued the snot out of the whole thing to keep everything in place. Here’s what the styled wig looked like when finished, 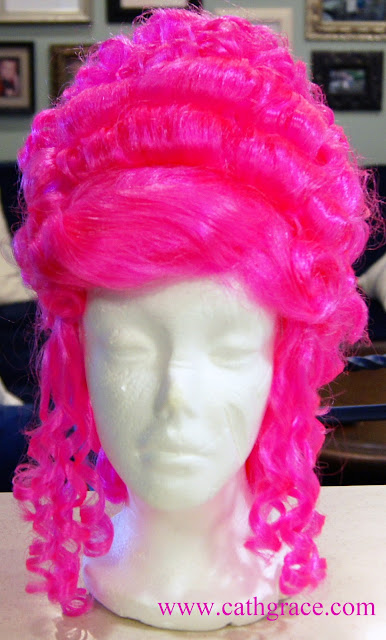 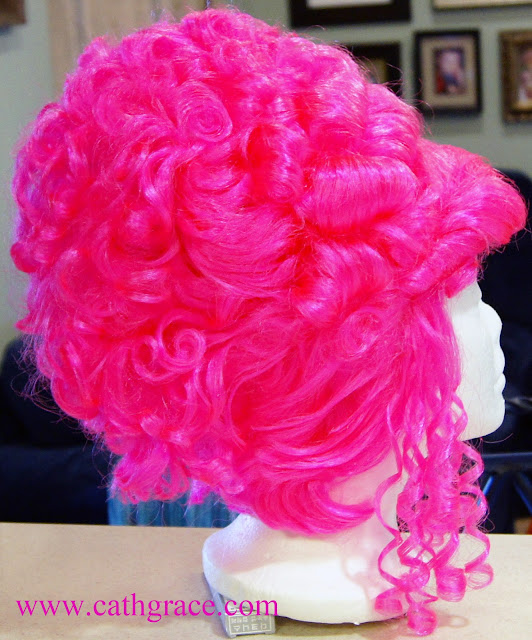 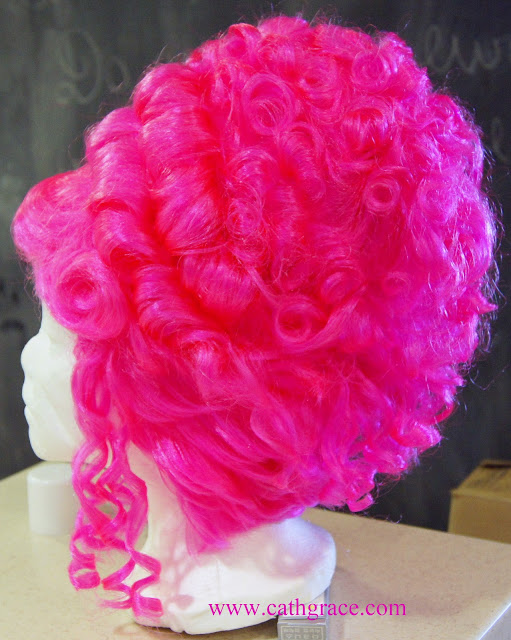 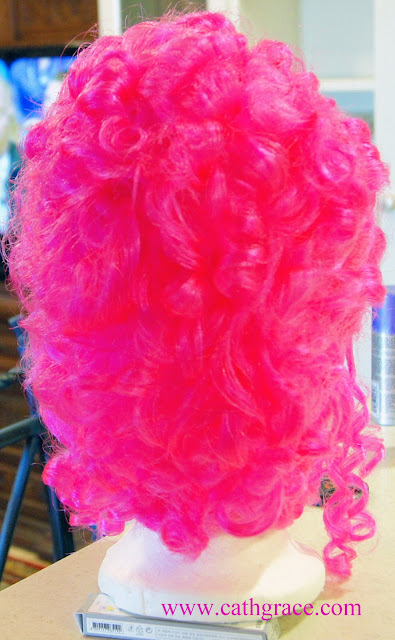 I could have been done here, but I didn’t really want the neon pink color, and it was meant to be a powdered wig, so I covered the foam head in plastic (spray paint will eat foam) and took the wig outside for a gentle coat of white spray paint. I wanted the pink to still show, so it was a very light coat, but the effect was just as I had hoped and worked to REALLY glue the hair in place, make it look less plastic-y and it made the wig the perfect color for Emmie’s dress. 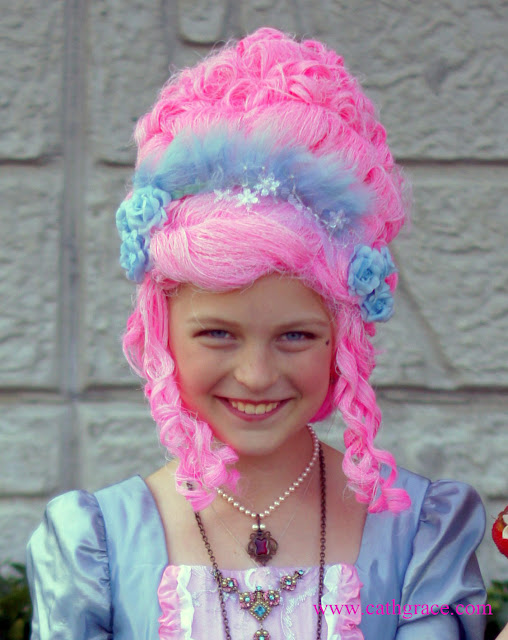 As a final touch, we added some blue fabric roses, a line of blue feather trim, and a little of the embroidered tulle that is over the pink on her skirt and bodice. The cone in the cap is perfect for fitting her long hair, which is all bundled up on top of her head in a bun. 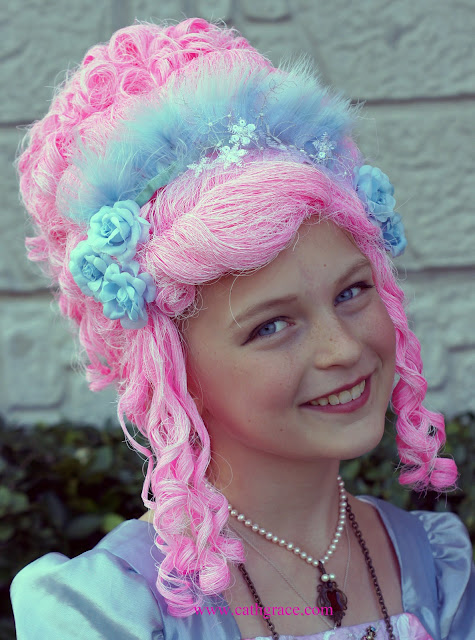 I am absolutely in love with how this turned out, it is almost exactly how I envisioned it, and she feels SOOOOO fancy in it! I’m going to share all the pictures of her whole dress in the next post, I don’t have a dress tutorial since I was mostly making it at night, and fitting it to her, so I am afraid there is not much to share as far as making it is concerned, but the finished product is pretty fun!