It’s Project Run and Play time again, and I am so excited to still be in the competition! This week is boy’s week, and I am REALLY excited about my look, it’s sooooo my aesthetic, and I hope you like it!
I got really stuck on what to call my look without sounding all over the place, but I finally settled on Vintage Military Academy, since Vintage Varsity Military sounded like a little too much alliteration without quite getting there! Either way, I love this look and hope you do too!

I started my “Boy’s Week” look by thinking about my son, and our family; I wanted to make something that would not only look cute but have meaning for us. When I think about *us* I immediately think of my husband’s military service, and the fact that we are an Air Force family. My Son LOVES all things military, and participates as a cadet in Civil Air Patrol (which is a US Air Force auxiliary organization with a service, and search and rescue mission) It’s a lot like scouting in the sense that you can get merit style badges and rank, except girls can join, which is a message I really like! (I actually had a really hard time getting him to relax for the photos, he kept standing like he was at attention!) 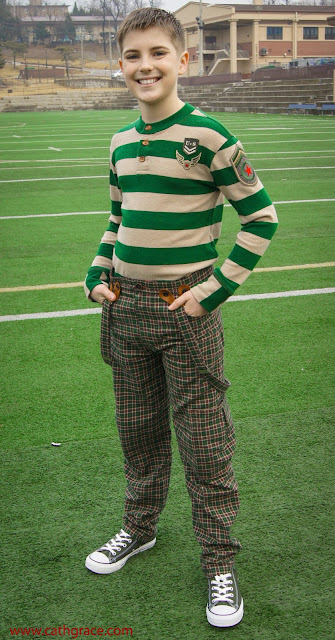 Because of my grandfather was a RAF WWII flying ace, Isaac has a special interest in the 1940’s military era. (his whole bedroom is decorated that way) so the 1940’s seemed like the perfect era to reference for Isaac’s personality (My husband also dresses this way a lot, he calls the look throwback rather than vintage since that is what the uniform style is called in the military.) For my color scheme, I went with green and tan, because in the 1940’s there was no US Air Force, we were the Army Air Corps back then, and the uniforms were called “Pinks and Greens” (not sure where the pink came from since they were tan and green).
For the shirt style, I went with a henley style shirt, done in a wide stripe fabric. This fabric has a beautiful stretch, and is sooooo soft! (I got all the fabric etc. for this look in Seoul at the fabric market there) My number 1 goal for this look was to execute it as perfectly as possible, since the style was so simple, so every stripe was hand basted before being sewn, to make sure they stayed lined up perfectly, and I cut the sleeves so that the stripes lined up through the body. There was a pretty heavy use of iron on interfacing while doing the collar and button placket, so that my stripes didn’t stretch out of alignment (I just peeled off and trimmed away any excess after the placket was sewn so that the stretch in the body of the shirt wasn’t effected.) 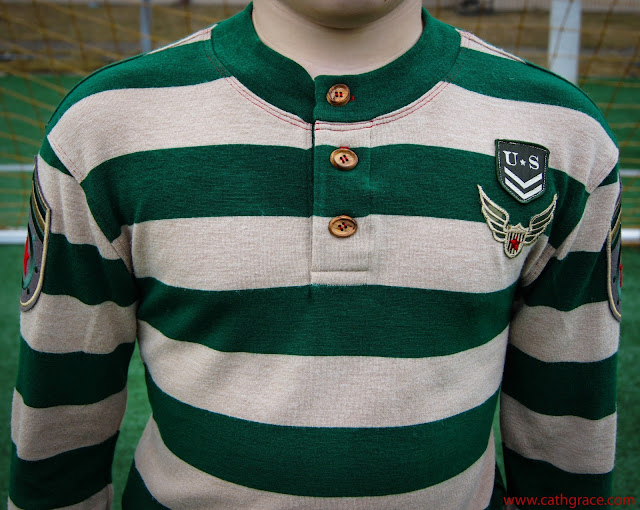 The military patches are all purchased, but I did embellish some of them in my color scheme, the shoulder “rank” was the tan and green, I just appliqued the red felt stars to tie in the red. (I used red top stitching on the shirt too) I’ve sewn A LOT of patches onto military uniforms in our 13 years in the military, and this was probably the first time I’ve enjoyed the process! (There’s nothing fun about sewing things onto uniforms, I’ve broken more needles that way than I can even begin to think about!) 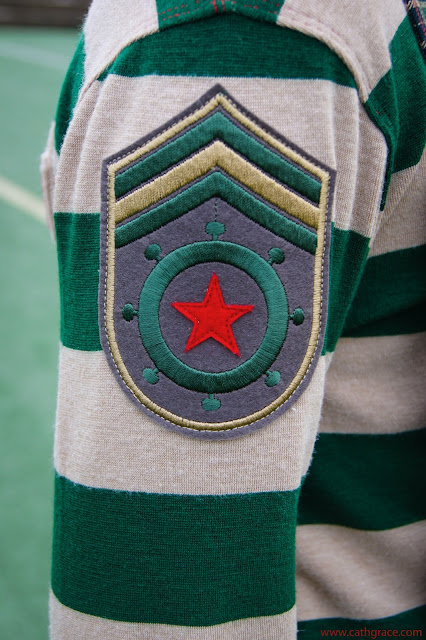 On the back I hand cut the #45 out of 2 layers of felt, I used 45 to reference the date 1945, and I liked the look of the numbers because this shirt reminded me of an old school football jersey too (he just needs a leather helmet!) I really like the pop of color the red has, and that it adds to the vintage school boy feel. 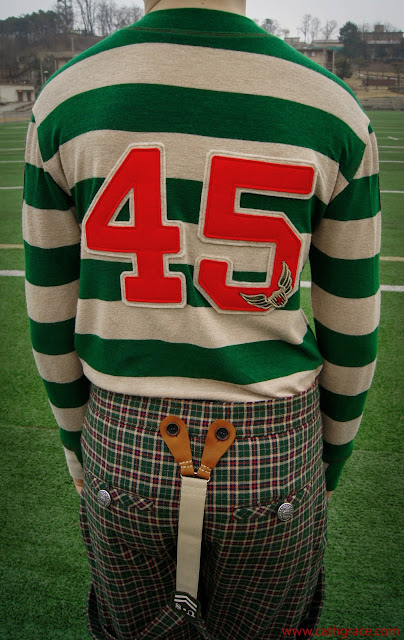 I turned the stripe on the sleeve cuffs to add a modern feel, since I only wanted to reference the 40’s and not make a direct costume, I was mindful to add some modern pops. (And because I do like to show it’s possible to add detail without being feminine, since I think I get stuck worrying about that sometimes.) 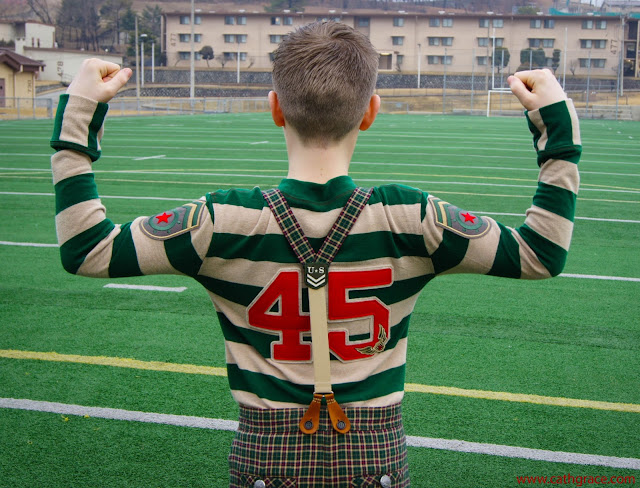 I finished off Isaac’s shirt by using only the green stripe in the collar, and then with 3 oval wood buttons. 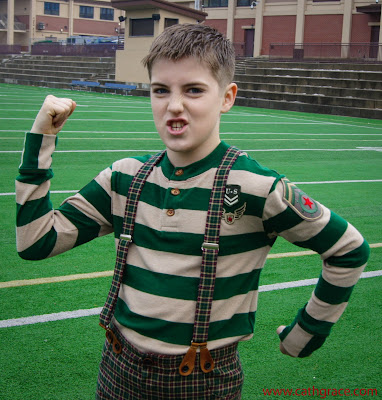 For the trousers, I used a red, navy, tan, and green, plaid. The fabric is a lovely brushed cotton twill, that is slightly heavier than a regular flannel. I continued on my quest for perfect pattern matching, and lined up as much of the plaid as I could.
I went with a fairly straight leg, that tapered right at the ankle. I am afraid I don’t love the skinny trend on boys, I keep getting the feeling we are going to look back on it with regret (much like I look at the 80s) so I prefer a more timeless feel, this shape is much more vintage, but I kept a dropped waist and flat front, so that it also stayed modern. The elastic portion on the back of the suspenders is so that he can bend and stretch while wearing them, and not get an atomic wedgie! 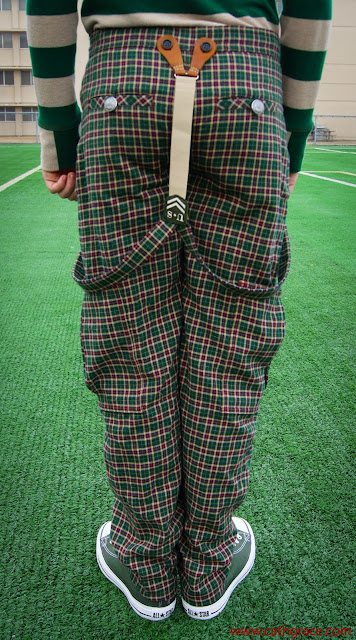 The suspenders button on to the pants, and because you don’t wear a belt with suspenders, I elected to not add any belt loops. The fly is fully functional with a locking zip, and I lined up all the plaid lines through the fly and the side pockets too. 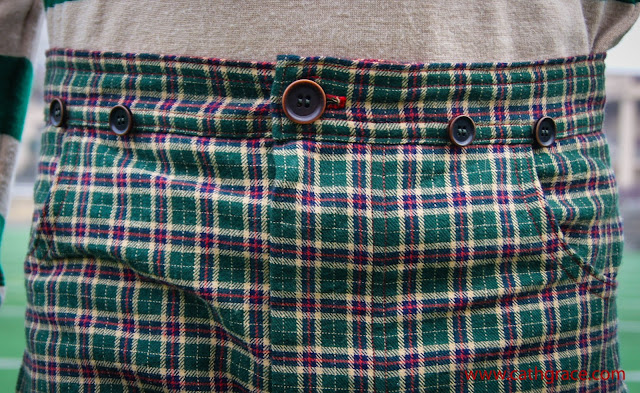 The back pockets are single welted, and I turned the welt on the bias to break up the pants a bit, or else it would have looked a little plain there. The silver buttons are Air Force blues coat buttons from one of my husband’s old uniforms; Isaac was so pleased to have a bit of his dad’s uniform on his outfit (he’s so proud of his papa!) 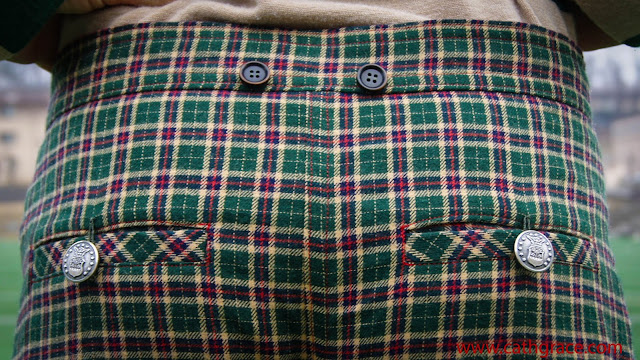 I hand stitched the button loop that holds the button shut (BUT if you look closely at any gaping, I even lined up the plaid in the pocket lining!) The suspenders are completely handmade by me including the leather stitching (I had to get out a hammer and awl to punch holes to stitch through!) and the metal hardware came from a set of military Mess Dress (the military tuxedo) suspenders, since I had a military clothing handy, but no Joann’s I could make a run to! 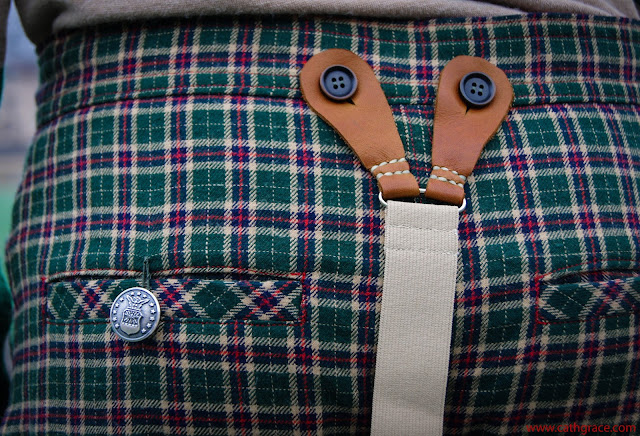 I am sort of in love with the look of them, and now want to make suspenders for everything. 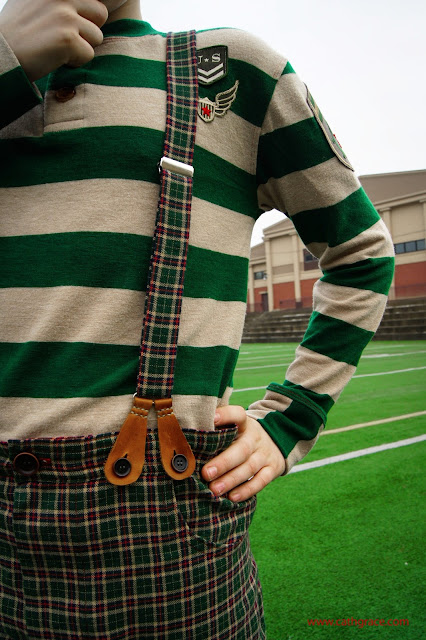 To reference back to the military look, the sides of his pants also have cargo pockets, although they are hard to spot with the pattern matching!

Because my kids are growing weeds, I made Isaac’s pants I tiny bit long, but with the ankle taper, I was able to have them not need to be folded or drag on the ground, so he can still grow an inch or two and not have his pants get high-watered (his shoes are also high tops, so even if they get a little short, it will still look intentional with the taper going into a boot.)  By the way, a tangent here, you can buy chucks in every color here (and I mean EVERY COLOR, there were 3 shades of turquoise blue) but they are a million bucks, we spent $58 on these shoes…….. I almost died, but everything here in Korea is expensive. 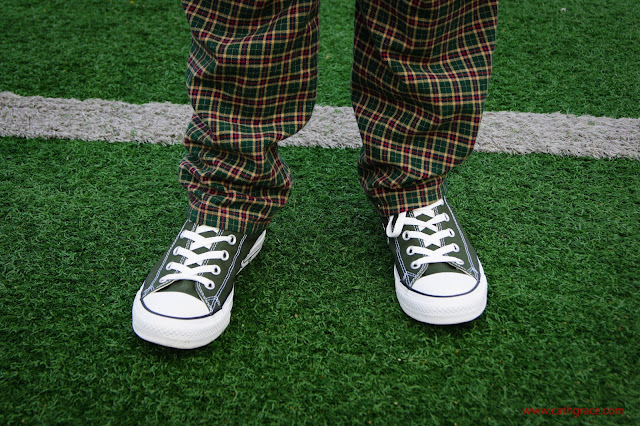 My sweet boy was very patient with me, and modeled out in the cold for me without a coat (the grass on our  school football field is AstroTurf, it looks super green out, but it was cold, and had barely stopped raining!

We even had to go buy a football for a prop, because my sweet boy is much more of an academic then a sportsman, although he does play during recess! 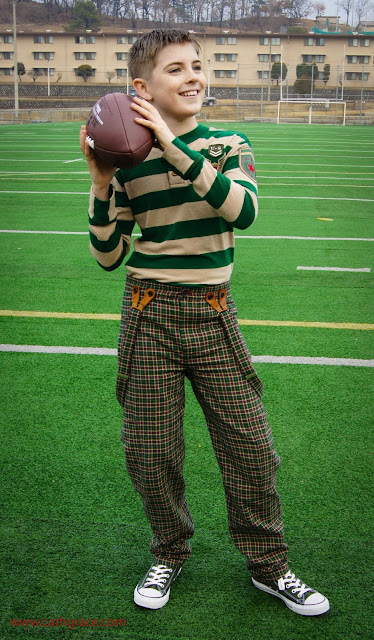 His dad did teach him how to tuck it into his arm so the recess kids stop knocking the ball out of his arms though! 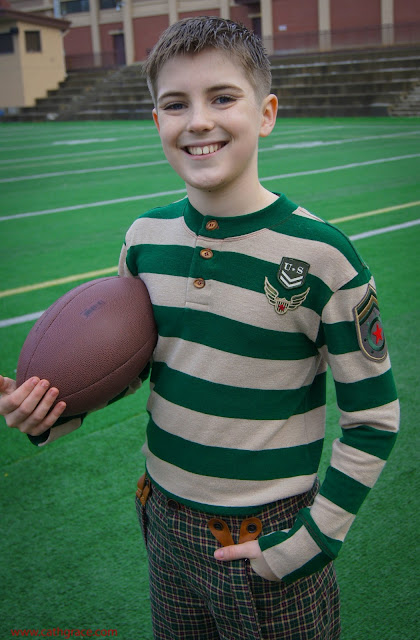 At this point feel free to stop reading, since the rest is not really about the outfit, but more about my boys, and I have already photo spammed you! But PLEASE do hop on over to Project Run and Play to check out the other looks and vote!
After the photo shoot, they decided to play a little (I don’t play, I worry too much about damaged fingers!)

But he tried, and tried to kick a field goal…… 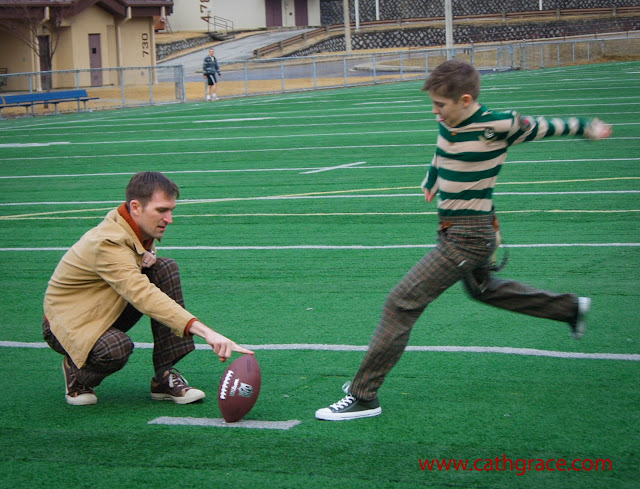 Before his dad decided to show him how it was done! 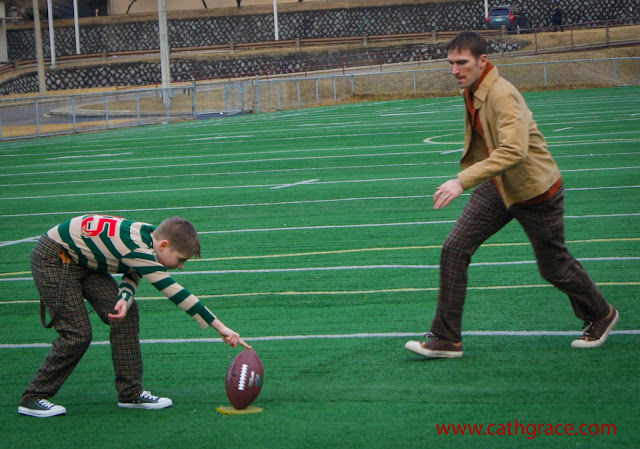 (SORRY Paul, I just had to add this picture, I still pretty much die every time I see your face, and how impressed Isaac is with the kick!) 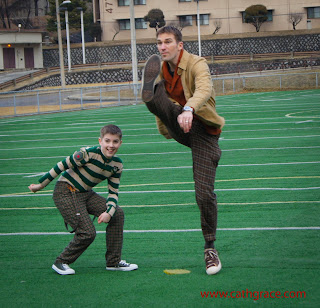 Unfortunately this picture is a little blurry, but I had to add it, since it made me laugh how similarly dressed they are (Paul’s pants are vintage wool) right down to the shoe style! I guess we know where I got my real inspiration from! 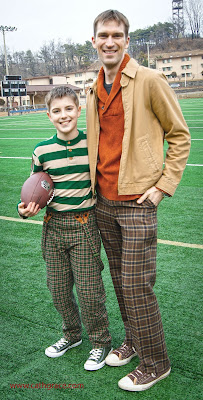