Because I am participating in the Flip this pattern series (in July) I was given a copy of Oliver + s Roller Skate Dress pattern (since that is the pattern of the month in July.) I decided to make a version of the dress that was pretty straight out of the box, so that I could test the fit etc. on Emmie before I started fiddling around with changing the pattern for my July pattern flip.

I used 2 yards of a quilter’s cotton I got from fabric.com for this dress, I didn’t have any plans for the fabric when I bought it, (I was just rounding out my order to $35 so I could get the free shipping) but I think this worked out perfectly (since I barely had any left over!) I made the pattern in a size 12, which worked out to be the perfect size (even though Emmie is 10, she generally wears a 12.) 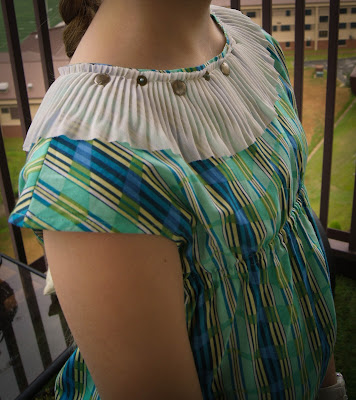 I didn’t line my dress like the pattern calls for, instead I just used self fabric bias strips to make facing to turn under for all my edges. The neck has a strip of trim that goes all the way around it, it’s just a purchased, pleated, synthetic, chiffon, strip, (say that 5 times fast) that I thought would dress things up a bit. 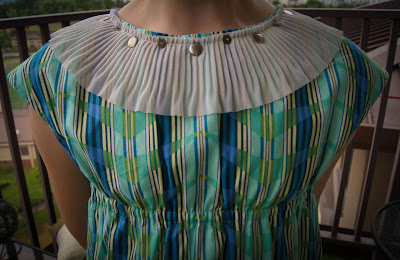 I added some decorative metal pieces to the front only, just to dress it up a bit more, there are seed beads on the smaller metal pieces too (I may change this up later, I am not sure it is as full as I would like, but I was finishing this last night at midnight, so I left it at this.) 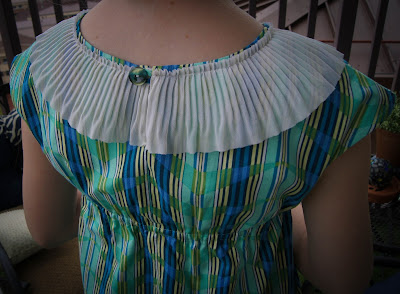 On the back I didn’t do any of the decoration, because Emmie doesn’t like it when there are things to catch in her hair. There is a single button with a bias loop closure at the back of her neck.

As far as pattern alterations are concerned, I added 4″ of length to the dress (I felt that the pattern was too short for a 12 year-old; little chubby legs are cute, but big girls look like they are in a miniskirt.) I put in pockets (Emmie doesn’t like it if a dress doesn’t have any pockets,) and as I said before, I didn’t line the dress, I used self fabric, bias tape to finish all the edges (except the hem which I just rolled.)

I really liked this pattern; it was easy to sew up, has a nice shape, and I could see it made 100 different ways (well I hope so, since I will be making it again in July!!!) I think that the only criticism I would make would be that although the body width is scaled to fit just fine, the scaling is perfectly even for the length changes from size to size, which you can’t do in older children. The scaling for length changes as children get to certain ages, (they tend to shoot up more at those ages,) but it is easy to fix on the pattern by adding length. Because of the length scaling issue, I feel that the chest elastic is too high on Emmie as well, and when I make it again, I will be dropping the elastic at least an inch lower than the pattern says to put it.

Anyway, I would totally suggest this as a fun quick pattern; the cost is quite high (I don’t think I would have bought it if I hadn’t been given it, but that is because I can make my own patterns.) but if you are thinking you would make it over and over again, it is a great time saver. NOW I just have to decided what my flipped pattern will look like (can I turn in 5-6 pretty please?)

OH! and thanks to Paul, who took all these pictures for me this morning! I slept in later than usual because Paul has a class on Tuesday mornings he does from home, (so he gets the kids out the door for school on Tuesdays) and he was thoughtful enough to take pictures for me without me even asking, when Emmie decided to wear her new dress!