This morning while I was sewing some liners for a couple of baskets I just bought for my kitchen, the fire alarm in our building went off. This is honestly my worst nightmare since we live on the 12th floor! So I grabbed my kids and proceeded to descend down 10 flights of stairs, before meeting up with an adult neighbor as she was coming up the stairwell calling for her mother. We asked if she needed help, and were told that she did need help, that her mother was stuck in their apartment having just had double knee surgery, and that she also had 2 dogs and a five year old with her mother.

So I told the kids to finish going out, (which they promptly refused to do,) so the kids and I turned around, and ran up 9 flights of stairs to the 11th floor (at this point I would like to point out that there was no indication at all that there was a real fire in the building, and the whole place is full of firewalls, or I would not be going back up with my children, but they are admittedly more fit then me, and can help with dogs and children at the very least.) We got up to the 11th floor only to find that the neighbor’s family was already gone (they possibly took the elevator since we never saw them on the stairs.) Anyway, we THEN went down 11 flights of stairs to get out of the building. It turns out that the construction crew working on the freight elevator tripped the alarm, so there was no fire, but I had better get great legs for 30 flights of stairs!

We were eventually let back inside and I finished off my basket liners; I’m trying to free up drawer space by putting my washcloths on the microwave, 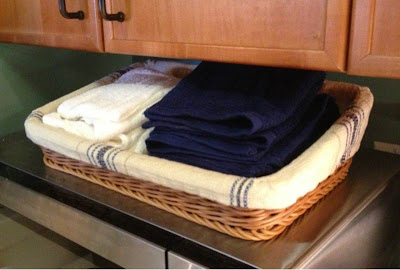 and a basket on the fridge (the cupboard behind holds the Holiday china, so it’s only used a couple of times a year) 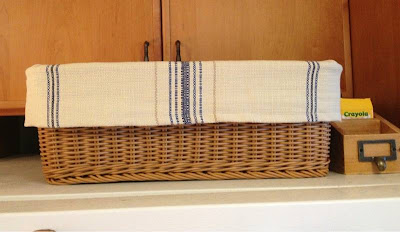 Anyway, that’s as adventurous as it gets around here, basket liners and not an actual fire! (I’ll take the not a fire any-day though! )

– Posted using BlogPress from my iPhone