Hello! Today was a brilliant day here in Spain; I got to go to the Royal Tapestry Workshop and see the weavers in action, which was awesome (but alas no pictures allowed.) BUT I do have a rather picture intensive post today; in complete contrast to yesterday’s puppy costume, today I have Emmie’s Witch costume to share, 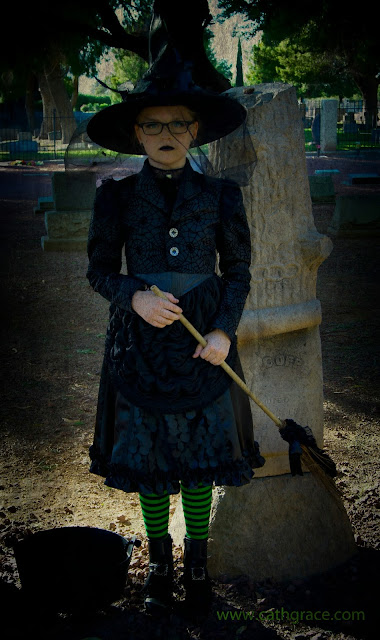 Emmie’s costume all got started with the hat. She found the witch’s hat at a Halloween store, and IMMEDIATELY wanted to be a witch. I have been sharing sneak peeks on my FB page as I made this costume, so some of you may have had an idea what it was going to look like. 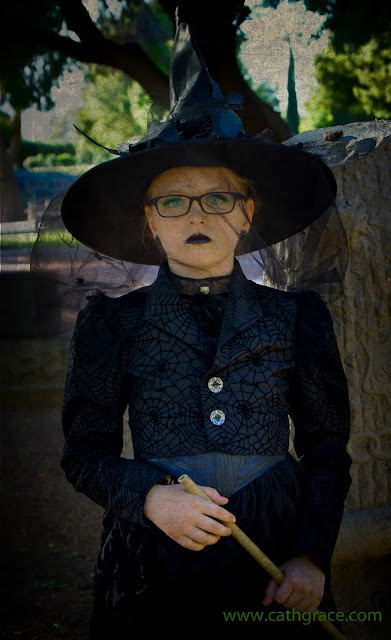 Other than being desperate for the hat (and broom to be honest) the rest of the details for the costume, Emmie left up to me. I decided on a black on black Victorian theme, and pretty much raided Joann’s and Hancock’s for every black textured fabric I could find. I used simplicity 2843 to make this costume, combining several of the looks. 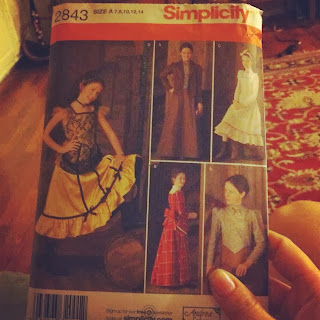 I used a spiderweb flocked synthetic taffeta fabric from the Halloween section for the jacket, with spider lace inserted into the shoulder seam, and then I shredded the lace after the jacket was all sewn. 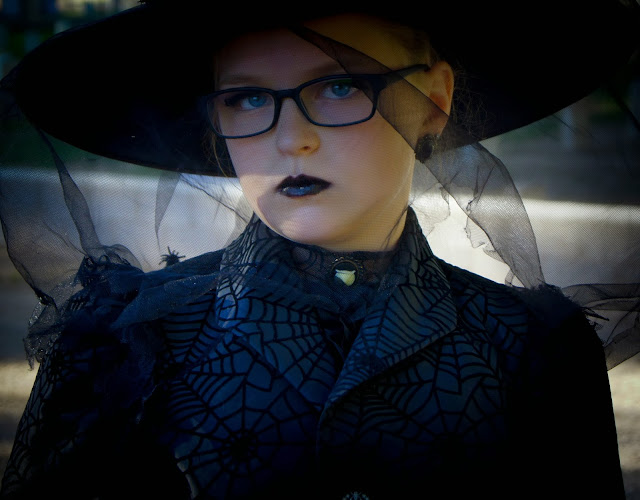 I cut the front of the jacket shorter than the pattern indicated, and closed it with 2 black and mother of pearl buttons. 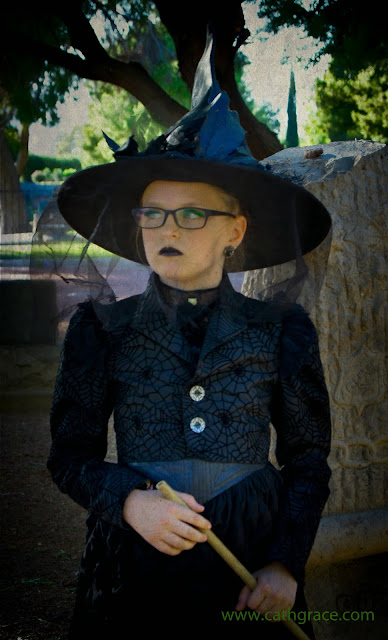 The back was cut longer than the pattern indicated, and then rounded into a sort of bustle/tails. 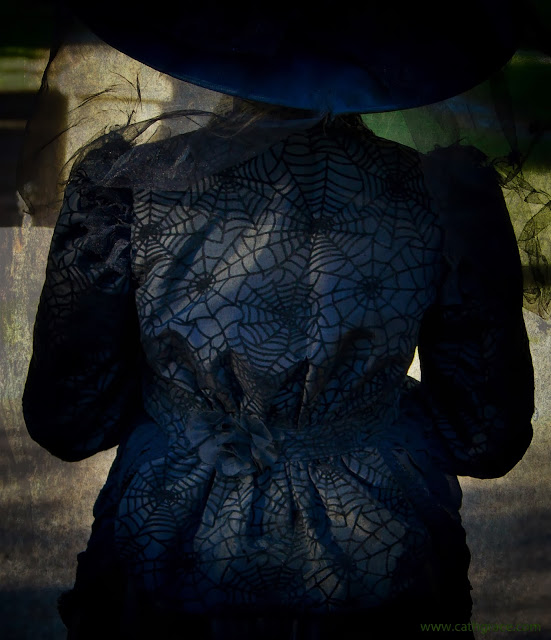 The underdress was made pretty much as the pattern indicated, (combining a few of the patterns looks) with just added embellishment 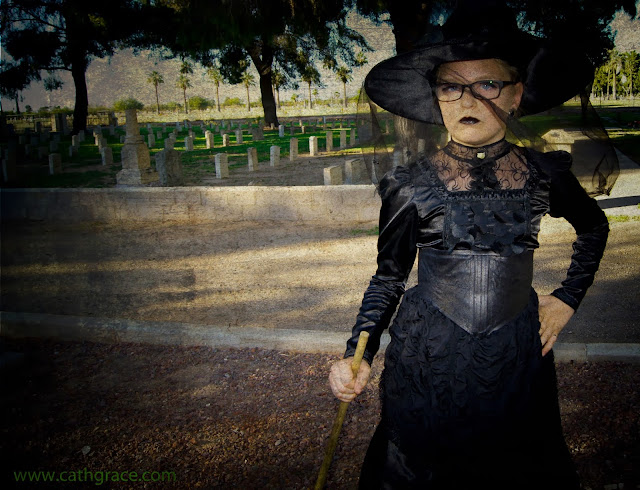 I didn’t like how the dress looked going from the bodice into the skirt, (I felt like it looked unfinished,) so I used a waxed ultra-suede to make a boned waist cincher. In-between the boning channels I top-stitched spiderwebs in black thread, not that you can see it in the pictures, but I love little details like that! 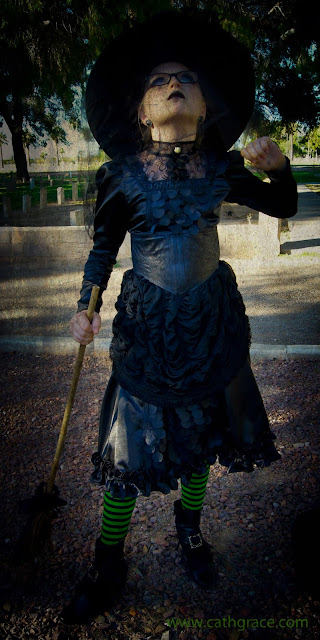 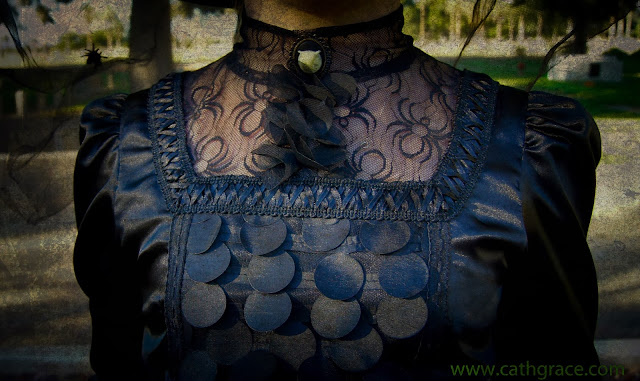 the front drape was a black knit, and edged in an upholstery trim (I really looked at all things black!)

The lower skirt ruffle has a velvet trim over the seam, which helps stiffen the hem, and make the skirt stand out more. We were able to find a cauldron to be her treat bucket, we just replaced the plastic handle with a black rope one for strength. 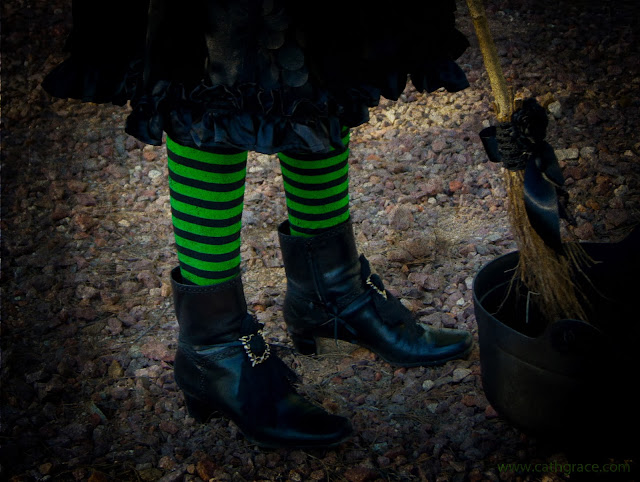 The boots came from a thrift store, and Emmie sewed bits of the spider lace, to buckles that we got at Hancock Fabrics. The green stripy tights were the only pop of color in the outfit, and I LOVE them! 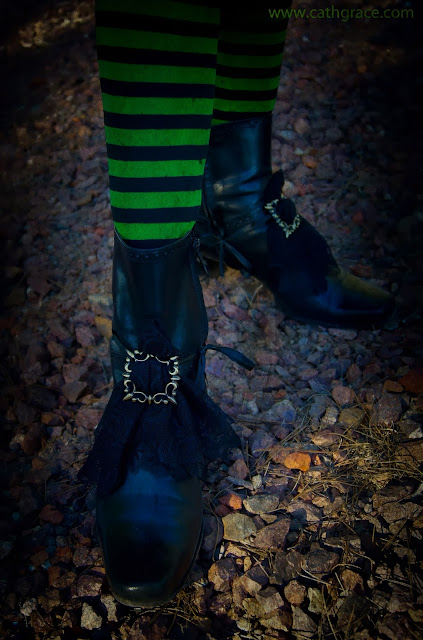 In the pictures the buckles are held on with ribbon, but after the fact Emmie stitched them onto black elastic figure eights, since the ribbon kept untying on her. 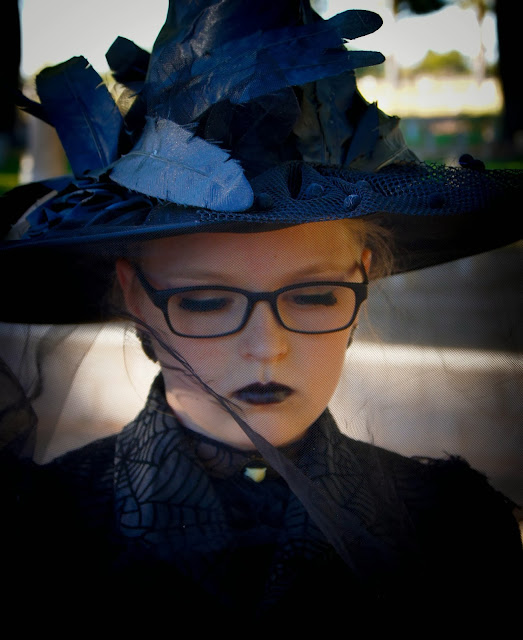 It’s hard to see all the nuances in this costume in pictures (black on black will do that!) Her eyelashes are black lace false eyelashes, and she has beautiful antique jet looking earrings (borrowed from my mom) The only thing I did to the hat, was tear the bottom edge of the veil, it was originally cut straight, which we didn’t think looked right, so I ripped the bottom 1/2″ off.

The broom is from the Halloween store, and we added the black feathers, ribbons, and roses. 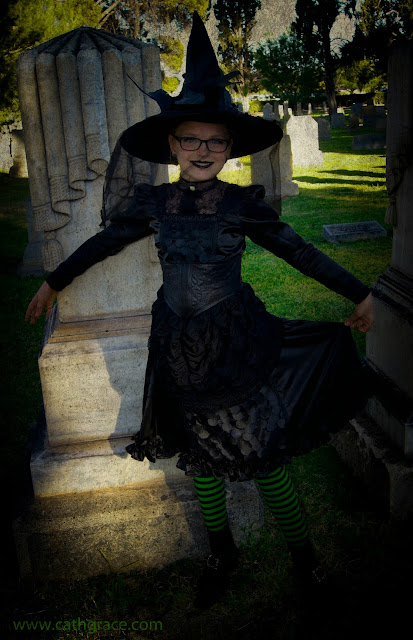 I think every little girl should get to be a traditional witch at least once, although my sister Sarah was making fun of me for turning what is supposed to be the world’s easiest costume (buy hat, wear anything black you already have) into something complicated! 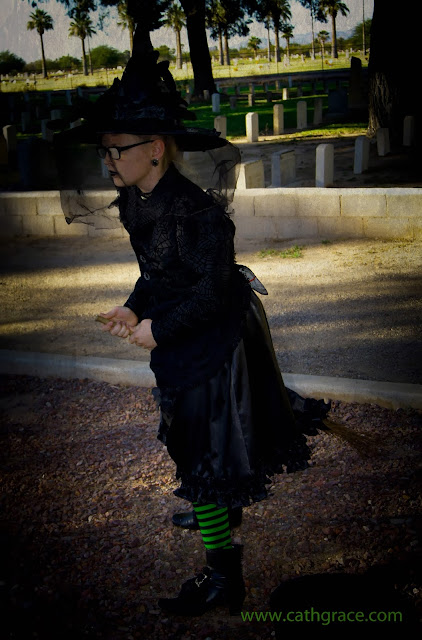 But Emmie was over the moon with how it turned out! (and I made my mom cry she was so proud of my work, I love you mom!) It was pretty fun doing the photo shoot too, my mom, sister, the kids and I went to the oldest graveyard in Tucson, and it was fun to have my mom and Sarah getting into a blog photo shoot and suggesting areas to go stand!

I also tried my hand at some Photoshop textures with some of the photos, which was kind of fun if not overly useful for much beyond a witch costume photo shoot!

Anyway, I would love to hear what you think about any of it (do you hate the photo textures? I worry that it makes the details less clear, so I didn’t use them on everything.) I am also excited to share Isaac’s costume tomorrow, as I happen to think it is soooooo him, and hilarious (I laugh every time I look at the pictures)