Yay, we are in a new year! I’m very excited to move into 2014 (even though 2013 had some awesome highlights!) and I am hoping to achieve some goals this year (I actually really like the idea of resolutions, I know some people really don’t, or feel like the word has a lot to do with only temporary changes, etc. but I like the idea anyway!) So, I decided on 12 resolutions to work on over the next 12 months (not necessarily one a month, but I just liked the #12.) 🙂 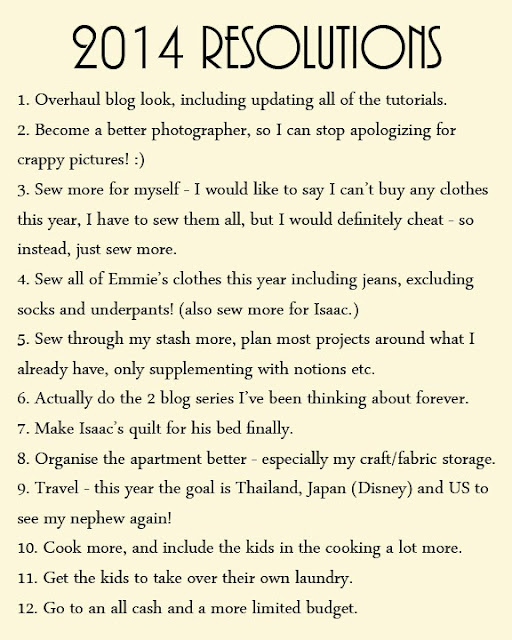 1. I am going to try to do this one early in the year, I can’t afford to have someone else do it, so I will have to come up with something myself, but I want the blog to look better, and be easier to navigate. I’m not making a goal to post more often etc. though because I have been noticing A LOT of burn out lately; has anyone else noticed all of the people quitting blogging recently because they are too overwhelmed? I feel like I need to own my blog and not the other way around, so if I HAVE content and WANT to post I will, but I don’t want to have to make up stuff just for the blog.
2. I am going to do more research on using my camera, taking pictures, and read up on how to better use photoshop and lightroom. Actually taking a lot more pictures will help too.
3. I want to make more of my own clothes, in part because I don’t want to spend too much, but also because I have an odd body shape, and it’s hard to find things that are exactly right for me. (but I can’t say no if I do find something EXACTLY right!!!)
4. Emmie and Isaac will be going back to public school this fall, so she will need school clothes this year, and I would like to make them all, I think it’s very possible, and I only have so many years left before they are out of the house, so I need to do it now! (I will try to make SOME of Isaac’s clothes, but boys are harder, since they all sort of just wear a jeans and T-shirt uniform, and he will be starting High School.)
5. I need to deplete my stash a little, I have too much to store it really effectively, and I really can make some wonderful things out of what I have, I just need to get down to doing it. I am not going to limit myself to JUST my stash, but I want to start there first.
6. I have been thinking about doing a few different year long series for a little while now, but I keep thinking I need to clean up the blog first, (which I will try to do early,) but either way I need to just get on it! The first one is to pick a single commercial pattern, and sew one version a month for the whole year, each one made different with just simple pattern alterations. (I need to figure out what pattern still) and the second is to sew through my subscription of Burda Magazine, I have had a subscription for the last year, and it’s really fun getting the patterns in the mail, but I never make anything from it! So this year, I want to make at least one item a month from the magazine. (Would anyone be interested in sew alongs or link parties for either of those? Guest posts maybe? I haven’t really run any series yet so it’s all new to me.)
7. I have promised Isaac a quilt to put at the bottom of his bed for ages, it’s the last thing in his room, and he has decided on what he wants, so now I need to actually get on it.
8. I need to purge, clean out, organize, and simplify, BUT not a ton, I think that’s the worst part, we are so close to streamlined, I just need to actually push myself the rest of the way there.
9. We have been DREAMING of Thailand since we moved to Korea, and this year will be the year! We need to finalize figuring out how much it will cost, so we can actually save for it in a meaningful way. Disney in Japan is the Kid’s dream, and we can get there pretty easily either by ferry or hop on a military flight, we just need to figure out plans. And for ME I want to get back to the US this spring, and go see baby Charley again before I die of deprivation; I will go alone so it isn’t as expensive, so just figuring out a convenient time with Paul’s work schedule/affording a ticket will be what’s needed.
10. I only have 4-5 years left before the kids go to COLLEGE (no, don’t talk to me about it.) Anyway, I need to start taking the time to have them help more so they can build more skills for when they are out of the house, and I need to get back into cooking more (Paul cooks mostly now, I got out of the habit when I was at school, but I need to do more.)
11. (see 10, I still don’t want to talk about it, BUT they need to learn the skills now.)
12. This one is a big one for me. I have sort of been spending willy nilly the last couple of years, with the house remodel, the move, etc. and it is not helping us grow our savings, or plan towards retirement (or college for the kids.) but I need to rein myself back in, and I am going to a cash only budget – no cash = no spending. I’m going to realistically budget for crafting and entertainment, but keep it limited to reasonable amounts too. Paul works really hard for our money, (so do I) so I would like to see our saving’s reflect that a little more.
Anyway, that’s my 12 for the year, I will try to constantly re-evaluate how I am doing and check in here for accountability! I have a 2013 reflection post that I want to write, but I will do that in a couple of days while I think about it a little.