Have I ever told you about my obsession with wanting a Father Christmas/Santa that is dressed like a 16th Century German Landsknect? No? Odd, it actually has come up repeatedly over the years in our house, so it has HARDLY been a secret!

Don’t know what a Landsknect looks like? Here you go……

They are awesome right? I actually got the idea in 2005 when the movie, Chronicles of Narnia, The Lion, The Witch, and The Wardrobe came out. Remember the Father Christmas in that? He was VERY German looking, and a seed was planted!

I’ve looked and looked over the last few years, but never really found a body that I was pleased with, for turning into my German Santa, but this year the Base Exchange got in these lovely 3 ft tall Santas,

They were originally $129, which was never going to happen, there was no way I was going to pay that, just to pull him apart and remake him. So I watched, and I waited for him to go on sale…… The BX hates to put anything on sale, and when they do it is usually really stingy (we seriously still had Christmas decorations from LAST year for nearly full price as of this September.) Then suddenly 2 days before Christmas, he went on sale for $68.47 which we decided was as good as it was going to get from the BX, and I bit the bullet and paid for him. There was nothing really wrong with him being silver (other than the fact he’s not quite right for my decor) but he wasn’t the Landsknecht Father Christmas of My dreams.

So I stripped him down to his skivvies (or a black plastic/foam equivalent) and started work. I began by trying to paint his boots, it became clear very quickly that, that wasn’t going to work (the silver spray paint wasn’t going to accept anything but spray paint, but it’s too cold here for me to do that.)

So I thought about it for a bit, and decided on black tissue paper that I tore up and decoupaged on, with very dark brown paint dry brushed lightly on top; the effect is very leather like, and I love it! I used some brown tissue paper to add Landsknecht style cutout shapes to the top, and acrylic paint to do stitching lines, then I finished everything with a layer of satin varnish.

Here are his pants that I made, I pretty much love them (codpiece and all.) The pants are wool, with wool applique, that has been pinked/sliced. (I didn’t have to treat the slices at all, since they are felted wool and won’t fray)The pants are finished on the bottom with fur that I hot glued on as the transition point for the boots. The codpiece is a stuffed flap that went over the groin area in period, and I think it makes these pants!

Here’s what his whole body looked like before I added a coat. I made a quilted velvet top, with puffed sleeves done in a similar style as his pants. The pieces are all sewn individually, but they are truthfully also hot glued in place (hey, if it’s good enough for Project Runway….) He has a faux linen undershirt too, that really only goes around his neck like a dicky/partlet, and acts like under sleeves. I used a ribbon from my stash to look like embroidered black work on the collar and cuffs. His hat is made as a Landsknecht/Santa hybrid, that I have better pictures of later.

And then here he is all finished with his coat added.

I am pretty excited. He is everything I dreamed he would be! I made him mostly out of stash fabric, only adding the navy felted wool, and the wreath in his hands (and the tree on his back that you will see later.)

I trimmed his beard a little shorter to show off his velvet more, but also to make him look more 16th century German.

His coat is closed with a necklace clasp, just sewn on to the coat, The wreath was a $5 one that had red berries and poinsettias on it, I just pulled them off and replaced them with stash leftovers from other projects. The French Horn was a present from my mom last year, she gave me a whole bag of them, and I think they are my favorite addition to my Christmas decor.

On Father Christmas’ back, I made a bag, that I put a $2 tree, Emmie’s nutcracker, a present, and some balls and greenery that I love (I found the balls out in Korea, and it has been years since I have seen this style, so I had to have them, I got a whole box for $3)

This is what I mean by a Landsknecht/Santa hybrid for the hat, it has a Santa point, and fur puff – but the front is puffed, looped, and slashed (and silk lined) to look Landsknecht.

The coat has half circle sleeves trimmed in velvet ribbon; I bought the wool blend coat fabric forever ago from a Hancock Fabrics in Tucson, I was very happy with the colors for this project!

I added pheasant feathers, and faux greenery to the hat too.

Here’s a close up of the sleeve and coat fabric. The gathering in the velvet is so that it curves smoothly around the circle, since I was asking a straight trim to curve.

The necklace came from my stash of jewelry making supplies, the pendant used to have red in the center, I just used grey nail polish to make it match a little better.

Another view of his hat.

I am obsessed with the codpiece that peeks out just a little from the coat, THAT’S what makes him authentic, and details like that please my historical costumer’s heart! (I have to use my degree somewhere I guess)

There is a ring of fur under the hat loops as well, as a nod towards Santa’s traditional hat. I also love his shorter and more squared off German beard.

Anyway, I feel like he was totally worth the wait, (and the work rushing to get him done before Christmas) and I finally feel complete in my Christmas decorations with my huge Landsknecht Father Christmas! He is placed by the fireplace now, and I am just sad he won’t be able to stay out longer!

It’s Christmas Eve here in Korea, and the kids are already in bed, so we are putting the finishing touches on wrapping gifts, and getting ready for tomorrow. I hope all of you have wonderful holidays, and that you enjoy time with your families and friends!

3 comments for “A Landsknecht Father Christmas” 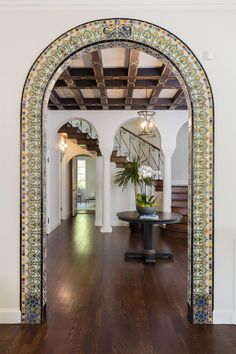